Prague Zoo: how to get, what to see, entrance fee | Attractions
Czech Republic
03.05.2020 by Dmitriy Nikitin
0

The next day in Prague I decided to fulfill my old dream – to see a giraffe! Yes, yes, a giraffe – one of the many animals which surprise me! When I was only preparing for my 4 day trip to Prague, I was surprised that the Prague Zoo was the fourth in the ranking of world zoos according to TripAdvisor.com!

Being in Prague and not planning a visit to the Prague Zoo would be an unacceptable mistake! 🙂

After an excellent night at a three-star hotel, I was completely ready to fulfill my dream! In the previous evening I figured out the route of how I can get to the zoo. It should have taken about two hours from my hotel, so I decided to hurry and not to waste time in vain!

How to get to Prague Zoo

I built the route to get by tram from the hotel to the city center first, and then from there I wanted to get to the zoo.

There are several ways to get to the Prague Zoo, depending on where you are at the moment:

Among of all the proposed options, I had to use bus number 112 in any case, so the only thing that needed to be done was to get to the Nádraží Holešovice station. I took the tram to the main railway station Praha Hlavní Nádraží. Then from there, after walking a few minutes, I took the subway (red line C) to the station Nádraží Holešovice.

Always look around, it is very interesting there

Walking along the alley in the park I noticed a very interesting monument. In a bronze sculpture, two men froze in a passionate embrace and kiss. Later I found that this monument is called “The Brotherhood” (“Sbratření”) and symbolizes the joyful meeting of the Soviet warrior and the Czech partisan. The warrior of the Soviet army greets his Czech comrade with a kiss on the cheek. So, the author of this sculpture Karel Pokorný depicted a moment of gratitude and fraternity after the Prague liberation from the German invaders.

Since I did not know the schedule of bus No. 112, I decided to hurry up! And I did not lose, because as soon as I reached the necessary stop, the bus was already ready to leave, and the next one according to the schedule should have been in 30 minutes. After some time, I was already standing at the Zoo Ticket Office.

The Prague Zoo is open daily, year-round, but the opening hours are slightly different, depending on the season.

As for tickets, the variety here is really incredible, depending on whether you are with or without children, young or already at a retired age, even if you came to the zoo with your dog! 🙂

There are tickets for a one-time visit (single entrance), as well as an annual subscription.

All details can be found on the Prague Zoo website, but I will write only about tickets for a single entrance:

And also, starting in 2020, there is a new pleasant service – “Happy Mondays” (except July and August, and holidays from January 1, April 2 and December 24 are also excluded). As these days, children from 3 to 15 years old, students and pensioners can visit the zoo for only 50 CZK.

Right at the entrance you can take a detailed guide and also take a look at the Zoo plan.

What to see at the Prague Zoo

After spending just one day in Prague, I was already amazed and impressed by the scale of buildings, parks and everything around! Even then, I understood that the Prague Zoo should not be an exception! 🙂

Right after entering you will find many signs with images and names of the main animals, according to the region. I was surprised by a sign with the image of “Red Panda”. It is a panda, similar to his big brother “Giant Panda”, but I haven’t seen this kind of bears, especially since they have nothing to do with the bears!

This part was dedicated to Asian animals. I thought: “Alright, I’m going to go from winter to summer!” and dived through the thick rubber curtain, which was separating “the tropic world” from the cold Prague autumn.

It was very hot and humid in this beautiful tropical forest, considering that I was in an autumn but warm jacket. So, the next one according to the plan was something cooler.

I’ve noticed, that many kids were having fun somewhere upstairs, so I was wondering what it is in there!

I will never forget that incredible impression when you do not expect to see such an animal here – it was a real polar bear! My emotions were so vivid that I was “stuck” near this cage for 30 minutes!

My goal in visiting the Prague Zoo was to find just one single animal that I dreamed of seeing!

Fulfillment of my cherished dream

When you really want something, it is always very difficult to get to it! The same thing happened with my dream. A few times I was carefully investigating the map, looked at the signs, but it was completely incomprehensible how to find an aviary with giraffes! It turned out to be some kind of a quest! 🙂

I saw many animals I knew – they were pink flamingos, different kinds of parrots, camels, bison, wolves, etc. I even decided to ask the meerkat where I can find a giraffe?! 🙂

Finally, my long-cherished dream came true – to see a giraffe! This childhood dream was inspired by cartoons about Africa, and about these incredibly graceful and beautiful animals. What a stunning and unimaginable drawing, like a drawing of the African savannah, froze on the giraffe’s skin! I just wanted to stroke him, touch cute horns and ride on horseback! 🙂

The dream came true, and now I can see all the others! 🙂 There are a huge number of them: tigers, lions, elephants, deer, porcupines, tapirs and even a kangaroo!

I had one more dream to see a rhino and a hippopotamus! However, these areas were closed for reconstruction. Well, text time, in another place, but I will certainly fulfill this dream!

Here are some outstanding representatives of the animal Kingdom in Prague Zoo. 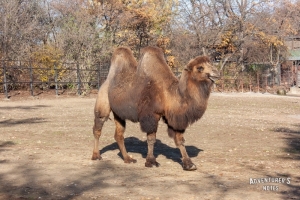 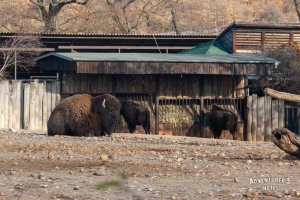 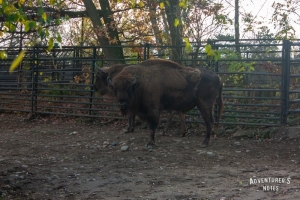 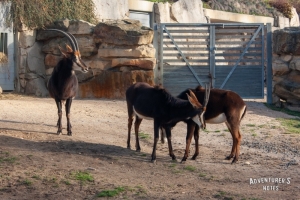 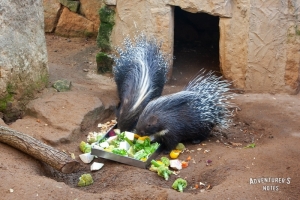 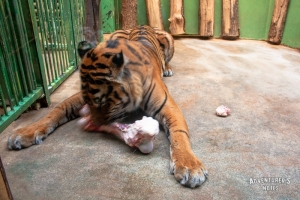 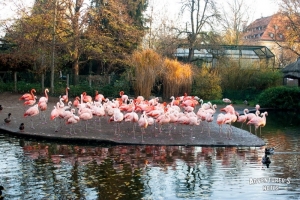 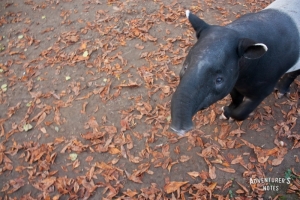 The time flew so fast, that I hardly noticed that it was already time to head for the exit, because the Prague Zoo was going to close soon.

An unexpected meeting with the Royal Family

I was almost headed for the exit, when the man’s eyes and mine met. He amiably smiled at me, and asked a question: “Have you seen a lion here?” I replied that the aviary with lions is directly opposite! And he added to his question, and clarified that this is really an aviary with lions, but there are only lionesses here! Have I seen a male lion?! And then I thought that “The King of the Animals” was not in this aviary! 🙂

Word for word, and the conversation turned to who I am and where I’m from. I told him, that I am a tourist from Ukraine, I was traveling around Czech Republic and I am very impressed by the beauty of Prague. After a while he told me his secret! The secret was that he and his wife are a part of the Royal Family, and their little son is the future Heir! Unfortunately, I did not know anything about the history of Czech Republic and the Royal Dynasty, so I absolutely did not remember their regalia, which he told me.

He also told me that he and his wife had to change clothes in order to hide from the crowd of onlookers, which is why they looked and were dressed in clothes, which is very unusual for modern times. It is difficult to describe in a nutshell, but I remember a similar image.

The conversation turned to religion and politics, and it was about how and who influences various countries in the world. In a short time, I learned a lot about the modern life of the Royal Family.

If I wait another 15 minutes, the main Prague Zoo gates will be closed! I had to hurry! However, I had to visit the “South Pole”! I met there very mischievous fur seals and penguins! 🙂

One of them was looking at me when I was already in a hurry to the closing gates!

In conclusion, I want to say that the Prague Zoo deserves special attention! I would definitely recommend you to visit this amazing place!

Take your children and spend an unforgettable day in Prague Zoo!

The next day, I decided to go to the next, without any exaggeration, wonder of the world, in the city Kutna Hora, to visit Siedlec Ossuary.

Sedlec Ossuary, Kutna Hora - a temple of bones, how to get, prices | Incredible

Prague for only $25 – my first solo adventure | Travel Tips

Sedlec Ossuary, Kutna Hora – a temple of bones, how to get, prices | Incredible

How to spend 4 days in Prague: the most interesting places | Attractions