When I was little, I really dreamed of seeing the Northern Lights! I’m sure that each of us in childhood was fascinated by any action that took place in the sky, whether raindrops were falling from the sky, a snowflake was melting on our palms, huge bizarre clouds, or a huge multi-colored rainbow! All this in childhood seemed like something magical, inexplicable, and alluring! 🙂 I believe that dreams or most cherished desires must come true! So, I grew up, but my childhood dream remained, so I decided to try to make it happen!

Where to see the Northern Lights in Norway?

When I was just thinking about where to go to see the Northern Lights, I read a lot of information. In general, it all boils down to the fact that you can see it above the “Arctic Circle”, where the Arctic begins – a territory of a harsh life, very long nights in winter and midnight sun in the summer!

Among all the possible places where to see the Northern Lights, Norway was in the lead. This is all because Norway has so fabulous nature, fjords, waterfalls, the mysterious history of the Viking times … And most importantly, Norway has a very mild winter! This is only a thanks to the warm Gulf Stream in the Atlantic Ocean. I was already traveling to Norway in summer, so I was trying to imagine how great it would be to see the magic of “Aurora Borealis” – this is another name for the Northern Lights.

So, if you want to see the Northern Lights in Norway, you can choose any location that is beyond the Arctic Circle. These can be such famous places as Lofoten Islands, North Cape (the northernmost point in Europe), or Svalbard archipelago (Spitsbergen). Sometimes you can see the Northern Lights below of the Arctic Circle, but I didn’t want to risk!

I chose a small town Tromsø. Why Tromsø? The answer is quite simple – it was the only city where the cheapest tickets from Gdansk in Poland were! 🙂 Since I already had friends in Gdansk, I decided to stay with them for a while, to explore the city, and later go north to the Arctic!

As it turned out, Tromsø is the best place to enjoy the magical natural phenomenon – the Northern Lights!

The Northern Lights in Tromsø

I arrived in Tromsø quite late in the evening. The weather didn’t dispose at all to watch the northern lights that evening. The whole sky was covered with dense snow clouds. The snow slowly whirled in the light of the night lights and it was the moment when I first felt like I’m in a fairy tale!

There are at least 8 places in Tromsø which are the most suitable for seeing the Northern Lights. All of them are marked with a special icon “Northern Lights observation point” on the tourist map.

The high-resolution map can be downloaded at the end of this story!

Since hostels and hotels in Norway are quite expensive, I decided to take a tent with me to enjoy the outdoors. It is good that the Norwegian government has adopted the Outdoor Recreation Act that allows you the right to roam which means you can set up tents almost anywhere in the country for 1 day if it is not a private area or you are no closer than 150 meters from the nearest residential building. However, you can put up your tent even in private areas if you ask the owner about that. Also, this permission is required if you need to stay in the private territory for more than two days. The limitation of setting up a tent or a car for one day does not apply to mountainous areas or any remote areas. So, you can stop in the mountains and forests in tents for more than 1 day.

I decided to use the right of nature access, so I went to the south of the island, where a very cozy Telegrafbukta bay is.

This is a large area intended for outdoor activities for Tromsø residents, and guests. Telegrafbukta has tables, benches, and barbecues. Also, there is a small beach – “Tromsø southern beach”, a toilet with hot water and other infrastructure for a comfortable stay. This area hosts the annual music festival “Buktafestivalen”. You can find more information about it and buy tickets on the festival organizers’ website.

Telegrafbukta is one of the best locations in my opinion where you can see the Northern Lights. There is also another recommended spot for observing the Northern Lights nearby – which is the southernmost point of the island – Sydspissen.

After a long day of exploring the most interesting places in Tromsø, I returned to this bay around 19:00 to stay overnight. As soon as I started preparing dinner, I suddenly noticed with my peripheral vision, a some kind of glow, something unusual began to happen around. I couldn’t believe my eyes! It seemed as if the wizard started painting the sky with green colors, creating bizarre patterns! It was real magic! That was the moment when my childhood dream came true! It was the Northern Lights – Aurora Borealis! 🙂

To be honest, seeing this marvelous nature for the first time was so emotional that even tears of joy rolled down from my eyes! Truly wonderful magic! 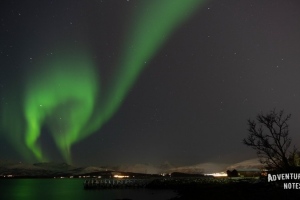 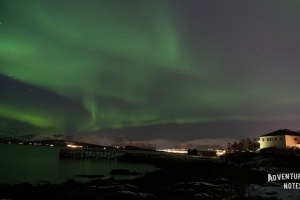 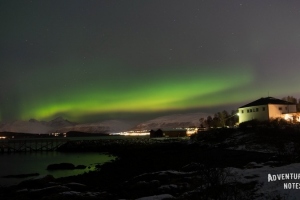 Another great spot to see the Northern Lights is the viewpoint near the summit of the Storsteinen mountain. This place is located on the mainland of Tromsø, so you need to cross a very picturesque bridge which connects the island with the mainland.

Passing the Arctic Cathedral, the road bifurcates. One direction leads to the Fjellheisen cable car (Tromsø Cable Car), where a very comfortable trailer for 28 people will take you to a height of 421 meters in just 4 minutes. This is not free, but affordable.

More information can be found on the official Fjellheisen website.

If you go straight along the road, without turning to the cable car direction, then follow the signs you will see stairs, which are called “Sherpa stairs” (Sherpa trapp). This staircase was built recently, in 2019. The construction began in 2016 by Sherpas and Mangars from Nepal. For 3 years they managed to lay out 1200 steps leading to the top of the mountain by hand. The duration of the route is about 30-75 minutes one way.

I decided not to waste my budget on the cable car, but to walk up the Sherpa stairs and enjoy the surrounding views! 🙂

At the top, where the cable car arrives, there is a small cafe where you can have a cup of hot coffee or buy a Norwegian souvenir.

I was in this place during the day, so I didn’t see the Northern Lights. But there’s really an amazing view of the entire island! Recommended! 🙂

Here is another place, or rather a whole walking route, where you can go in search of the polar lights. This route can take a full day to climb to the top of the Tromsdalstinden mountain and return to the city. The mount Tromsdalstinden is visible from almost every corner of Tromsø, so finding a route won’t be difficult. Just follow the signs named Tromsdalen. I want to note that it is not necessary to climb to the very top to see the Northern Lights. It will be enough just to go outside the city, where there is no light pollution.

I really wanted to go along this route, but the weather was not favorable at all, so I postponed this venture.

If you stand facing the entrance to the Arctic Cathedral, then to the left of it you can see several huge football fields. This spot is also very good for observing the Northern Lights. Everything you need is there – a great view and no lights around!

If you want to find other places suitable for the Northern Lights, you need to return to the island.

Another natural attraction is the huge Prestvannet Lake. There’s a very gratifying route around the lake. There are several areas with tables and benches. It is also a good place to take a thermos of hot tea and come here in the evening to enjoy a magical colorful show in the sky! 😉

When I arrived in Norway at the end of October, I unexpectedly discovered a real winter here. Therefore, the lake was covered with ice!

The entire island, where the city of Tromsø is located, is laced with hiking and ski trails. Norwegians are very athletic, so they spend a lot of time outdoors, doing sports, running, and when the weather allows, they go skiing.

In one of these natural parks around the city, they even built a Ski Jump Center, where you can hone your sports skills. Not far from this place is the Skihytta Cafe House, which is also an excellent observation point where you can look at the city from above, and if you are lucky, you can enjoy the Northern Lights.

To complete the list of recommended spots where you can see the Northern Lights, I want to add another spot near the lake Rundvannet. There is also a walking trail around the lake, sheds, benches, and tables. I haven’t been to this place, but I am sure that it is worthy of attention to have a great time in nature.

I’m confident that this list of beautiful places where you can see the Northern Lights in Tromso and its surroundings can be continued indefinitely because it’s super easy to find a secluded place without too much lighting on the island.

When is the best time to see the Northern Lights?

You can go to Norway for the Northern Lights from late September to late March. The darkest nights and very short days are observed during this period, i.e. there’s a high probability of seeing “Dancing Lights” in the sky. Most often, Aurora Borealis can be observed in the evening and until late at night. I would say it is approximately from 18:00 to 01:00. Unfortunately, there is no exact timetable for this natural phenomenon, so you can only rely on good weather and good luck.

In order to see the Northern Lights, several factors must coincide – a clear, cloudless sky (i.e. no precipitation in the form of rain or snow), no moon, because moonlight can affect the brightness of the radiance and of course your mood and patience! 🙂

As a result, a few days spent in Tromso, I managed to see the Northern Lights twice, and it was a unique and mesmerizing show!

I highly recommend everyone to go to Norway at least once in their life and fulfill their childhood dream! The emotions you’ll received from this magical phenomenon will be carved with scenic colors in your memories!

Golden Triangle – a place where Thailand, Laos and Myanmar meet

TOP 5 tips to save on accommodations with booking.com