“El Nido, Palawan” – what first comes to mind when you hear these, almost magical, words? 😉 Undoubtedly, this is a “paradise vacation”, “incredible nature” and of course “tours along the most beautiful and cozy bays and islands!” Are you intrigued? 😉 Then let’s go!!!

I left Palawan Island like a cherry on the top of the cake for the final stage of my adventure around the Philippines, which lasted a little over a month! During that time, I managed to visit 7 islands, and I even wrote a short review of the TOP 10 Exciting Attractions in Negros Island which are undoubtedly worth a visit! During the short time spent in the Philippines, I can sincerely say that I fell in love with this incredible and multifaceted country! Even Port Barton with its “secrets” did not leave me indifferent!

In El Nido, everything is arranged in a way that a visiting tourist needs to think as little as possible and spend as much as possible. Therefore, they came up with the “island-hopping” which are just different tours around different areas and divided them into groups A, B, C, D.

Since there are a lot of tourists in El Nido and the most popular tours are A and C, I decided to choose something less crowded. Since I think any of the proposed options is interesting, so I opted for a tour with the name “B”! 🙂

If you walk around El Nido, you can find signs with advertisements for island-hopping tours everywhere. Their prices are almost the same, but there is one life hack, how you can make any of the tours even cheaper! 😉

When Lamis and I just arrived at the hostel, the owner immediately suggested us to take a look at the big banner with tours, and the price can be negotiated later, so she can even give us a small discount!

As a result, the normal prices of island-hopping tours in El Nido are

We managed to agree to take “Tour B” for only 1200 pesos per person. The discount is only a couple of dollars, but it’s nice! 🙂

“Tour B” in details – the organization, different attractions, and our impressions

After agreeing to the price and making a payment in advance, we had nothing to worry about!

Exactly at 07:00, a minibus arrived for us, where several tourists were already waiting, and they also wanted to go to one of the proposed island-hopping tours. On the way to the pier in El Nido, we picked up a couple of people. We were a bit sleepy but in anticipation of an adventure! When we arrived at the pier everyone was asked where we were going to go.

I was very surprised by the process of organization! Everything was very harmonious like it has been worked out for years! As along the conveyor lines, all tourists were placed in groups and assigned to the boats. We also were not an exception, and after 10 minutes, boarded to our comfortable “ship”! 🙂

In total, together with us were another 8 tourists and 4 crew members who went on an adventure around the islands, which is quite a small group in comparison with how many other boats were filled!

When all preparations were completed, our boat set sail. At the exit from the lagoon, everyone moved toward their routes according to the purchased tour! Only 4 boats turned in our direction (including ours) and it was very pleasing because there won’t be many tourists 😉

After 40 minutes of fast sailing, we arrived at our first place – Entalula Island. Since there were small waves, the landing on the island took place into the water! But it wasn’t scary at all as the sea was perfect! 🙂

The island is very beautiful, sand is white, soft, and very pleasant to the touch! Mmmm, I just want to soak up this sand as long as possible!

All quickly rushed to be photographed with the bizarre rock, which is the most beautiful spot of this place! I had to wait a bit for everyone while they were taking plenty of pictures and going all around the beach! BTW, part of this amazing place is private property, and as evidence, there is a sign about that! But this doesn’t stop the tourists 😉

I was surprised that none of our group, except me, was swimming for some reason, although it is very comfortable here both to swim and sunbathe.

After spending about an hour on Entalula Island we went to the next spot.

The name of our next place is very unusual – “Snake Island”! The island has this name because of the shape of its sandbar! It looks just like a snake, and no there were no snakes around! 🙂 But I didn’t check, maybe these bastards are there too… 😉

If you climb the nearest mountain, you can see everything from a height!

We had about 40 minutes here to explore the surroundings, and after that, it was necessary to return to the boat to have lunch! 😛

Of course, I couldn’t sit still and, when everyone went for a walk back and forth on the sandbar, I decided to explore the island as much as possible. It turned out that just “around the corner” there are fantastic views of the neighboring islands, and there is also a good “photo zone” with a fallen palm! It was already lunchtime, so after all the exploring of the surroundings, we hurried to our boat, where lunch was already prepared! “Why on the boat?” – good question! So, it is because of the dogs living on these islands, which will surely beg for food from kind tourists! 🙂

While we were on the road, our Filipino team was preparing lunch in an improvised kitchen right on fire! Everything turned out to be very tasty! Our menu included: undoubtedly rice, several types of meat, noodles with vegetables, crabs, a couple of fish, vegetable stew, fruit slices! You can get also any drinks for an additional fee! We took Cola for 100 pesos per can! 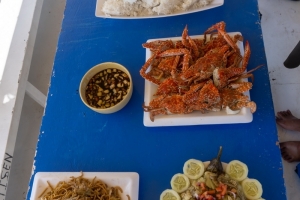 After a quite hearty dinner, everyone was ready to go on, to the new adventures! 🙂

The next destination was a truly mesmerizing attraction! As you probably already understood from my previous stories “Puerto Princesa Underground River”, “The longest underground river cave in Laos – Kong Lor Cave” I simply adore caves! So, when I saw in the description that we had to visit 2 caves, I immediately decided which tour I should choose!

After lunch, it became a bit more fun, so the road, lasting 20 minutes, seemed very fast. We moored ashore with a small strip of sand. But our goal was not a beach at all, it was this little hole.

Everyone took turns hastening to repeat acrobatic stunts to enter the Cudugnon Cave.

The cave has two huge halls with a vault height of about 20 meters. The first hall is quite dark, so all tourists immediately hurried to go to a more spacious and brighter second hall. Interestingly, this cave was relict, and archaeologists found the burials of the ancient sea people of Palawan here, as well as jewelry and artifacts from the time of the Song Dynasty (960-1279 AD) were also discovered. After a short rest in the coolness of the cave, I was so impressed with what I saw that I completely forgot that I have a camera on my neck. The path to the boat lay along the water, therefore, after only one awkward move my camera momentarily plunged into the water. Alas, after swimming it wasn’t possible to turn it on. So, the rest of our tour, I had to take pictures on the phone …

Slightly overshadowed by the thought that I would have to fix my camera, I continued enjoying the surrounding beauties, because in this case there was one more cave ahead! 🙂 The name is “Cathedral Cave”. It seemed to me that this is not quite a cave, but rather a huge grotto with tall arches, like at the cathedral! If the weather is good you can even go inside by a little boat and see the whole scale. But we weren’t lucky and our tour guides showed us this cave from a distance! However, I can say for sure that it is very impressive! 🙂

Since here you don’t need to go anywhere, this place took us about 10-15 minutes, while everyone took pictures of the view. A couple of tourists wanted to snorkel in this place, but it turned out that this was forbidden due to the abundance of sea snakes around the cave! After a while, we moved towards our final point.

Pinagbuyutan Island was left for the final part of the tour so that tourists can relax after a very busy day! This paradise is a 40-minute drive from Cathedral Cave. When we arrived at Pinagbuyutan Island we saw a quite long beach, palm thickets, and rocks. The water around has a crystal-emerald color! If paradise exists, then it is here – in “Tour B”!

This place was so beautiful and calm that I even took a nap for 40 minutes! 🙂

The highlight of this place is that there is enough space for everyone (but there were “already” or “only” 4 boats + a couple of boats with private tours for a couple of people)!

And in the end, I’ll say that no matter what tour you choose, I’m sure that you will be glad to see everything! Of course, I would like fewer tourists (and it is possible if you take a private tour), but in general, there will be enough time and space to make beautiful shots or just relax for everyone!

Satisfied and happy we arrived at about 16:00 at the same place from where we started in the early morning. Transfer to hotels was not supposed, but it was already not important, because El Nido fell in love with itself and its incredible nature!

“See you, El Nido!” I’m confident that I will return once again to this amazing place! 🙂