Puerto Princesa underground river on your own, prices | Palawan
Philippines
28.05.2020 by Dmitriy Nikitin
0

I noted several places myself going to Palawan. Some of these places are in Puerto Princesa. For example, Crocodile Farm, Butterfly Sanctuary, and other places outside the city. In my list, I certainly included visiting the underground river – “Puerto Princesa” (Puerto Princesa Subterranean River National Park) or simply called in abbreviation “PPUR” which stands for Puerto Princesa Underground River.

I visited an underground river once in Laos so I had an idea what it was. However, it was still sooooo interesting to see another phenomenon one more time regarding with caves and rivers! 🙂

At the airport, I noticed a lot of signage and offers with organized and “ALL IN” tours. You can see advertisement tours plastered even on the tricycle. I also saw tours to the underground river. The average cost of tours was about ₱2200 or even higher.

Of course, taking a package tour which includes round trip transfer, breakfast, visiting the nature reserve and the underground river is the easiest option but not always THE best option when you are on a budget. So, I wanted to organize a trip on my own which was not expensive!

Since I traveled with Lamis, if you remember her from her story about the Mystery of Port Barton, we decided to rent a scooter and just refill the fuel which was cheaper and go to the town of Sabang, the route to the underground river.

Where to rent cheap bikes in Puerto Princesa

Before I flew to Palawan, I was traveling in the Philippines for almost a month. Of course, I was already oriented in the prices of fuel, renting a motorcycle, food, and a lot more. So, a motorbike is the most convenient means of transportation in Asia. Therefore, when you arrive at a new place, the first thing you have to befriend is the one and only “motorbike”! 🙂

On the way from the airport (good thing that Puerto Princesa International Airport is within the city), I met a group of foreign tourists who were waiting for their friend on motorbikes. I decided to approach them and asked where they got to rent motorbikes and how much it costs. And their answer surprised me – they rented it for ₱700 per day. There were a lot of places to choose from and they were all in the same street. I’m going to tell you guys that it is very EXPENSIVE and this is literally ROBBING!!! The average price to rent a motorbike in the Philippines ranges from ₱250 – 500 for one day. The more days you rent the cheaper it cost per day! 😉

So, I thought “Okay, let’s figure something out” and we headed towards a huge mall to have breakfast. After having a hearty meal, it was possible to figure out the issue with the motorbike rental. I interviewed several people near the main entrance to the mall but… they couldn’t help me. Then I decided to find out where it was profitable to rent motorbikes from the tricycle driver. He made a few calls and said that he would take us to a place where we could rent a motorbike for ₱450 which was completely a different way! 🙂

After 10 minutes, we arrived at Dong’s Motorbike and Car Rental, just on the opposite side from the airport where we were just a while ago. The owner of the rental announced the same price which is ₱700, so I decided to be smart and told him that the tricycle driver promised us that the price is ₱450 per day. Anyway, he thought about it for a bit before considering and agreeing that I rent the bike for 2 days for ₱450 a day!

This place is just located to the right of the exit from the airport. There you can pick which you want to rent, car or bike. And remember that bargaining is applicable! 😉

How to get to Sabang from Puerto Princesa

There are various ways to get to Sabang from Puerto Princesa by yourself. These are options you can use:

So, we have settled everything with the bike and bought food and hit the road!

Since the national reserve is open from 08:00 to 16:00, we decided to arrive as early as possible. The trip took us about 2 and a half hours with an excellent cemented road! Halfway through our trip, I noticed that I forgot to bring my camera, so I had to enjoy the views with my own eyes and took photos using my phone.

What you need when independently visiting the Underground River

We didn’t know that visiting the national reserve it was necessary to get a “permit” in Sabang (It was ₱250 if I am not mistaken), somewhere in the tourist information we manage to arrive immediately at the port. There were a lot of people and nothing was comprehensible where to go and what to do.

In the end, after 20 minutes of wandering around, I managed to find out that:

If you are a Filipino, then you will pay less for the services. However, if you read this blog, then most likely, alas! You are a foreigner; you should pay more! 😀

General Entrance (without visiting the cave)

After everything is paid, you need to go to the pier where all the boats depart and choose the most suitable option. It’s either pay for the whole boat or join a group. So, we decided to choose the second one, so we had to wait a bit. While waiting we ate cookies! 😀

Just in case, here is a photo with a detailed price list for both foreigners and Filipinos.

The total cost of visiting the Puerto Princesa Underground River for two people was:

Towards to UNESCO HERITAGE

After about 20 minutes, we boarded the boat and were happy. We went in the direction of our long-cherished dream, listed as a world of wonder in UNESCO heritage – Puerto Princesa Underground River!

Our boat was swiftly moving forward, surrounded by other boats with explorers and adventurers who wanted to see this new wonder of the world. The boat trip lasted for 40 minutes along with the small current of waves. Everyone was in a lively queue, waited for further instructions before we all disembark. Everyone started to take photos and we are no exception! 🙂

After 5 minutes, we began to advance! Since they said that our turn has already come and we need to prepare to sail into the cave! After walking along a well-organized path through the forest, we went to another beach, calmer and cozier. There were boats ready for departure, loaded with tourists.

Everyone was given an audio guide, a life jacket, and a helmet. Everything was strictly organized by the staff of the reserve! Just look at that face!!! 😀

In the cave of the Puerto Princesa Underground River

After some time, it was our turn and we went to the Kingdom of Darkness, constant temperature, and bats! 🙂 The audio guide was broadcasting everything and was very pleasant to hear. The other guide from the boat told us stories, showing bizarre forms created by nature, stalactites, and incrustation! It was an utterly interesting trip, with a length of 3 kilometers and a duration of 45 minutes. What was seen inside charmed our souls and the surrounding silence added secrets and mystery!

Since I forgot my camera, we used the phone to take photos. Here are a few of them. 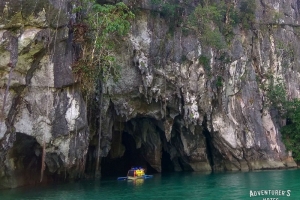 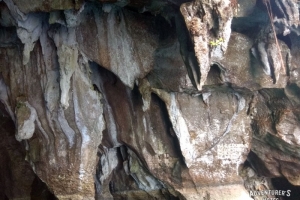 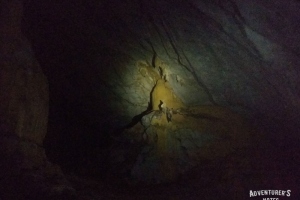 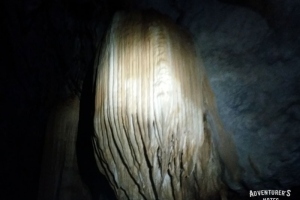 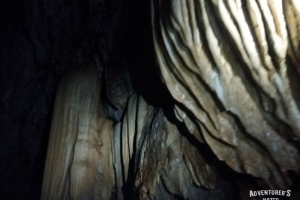 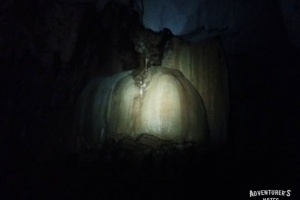 After the tour, everyone returned to the cozy beach but completely enthralled with different emotions and happiness after what they saw and experienced.

We had little time left to walk around and see the surroundings again. Seeing the monkeys and taking a photo against the background of an impromptu photo zone where you can confirm that we were here and saw everything with our own eyes! 😀

On the way back, while Lamis was in deep thoughts. I was investigating the surroundings on Google to understand how exactly we can get to the nearby attraction. To be honest, it turned out that Google did not understand how to get there exactly and offered one way which was the sea and probably by a boat…

What to see near Puerto Princesa Underground River

So, after an hour we arrived at the port. The trip took longer than we thought because there were big waves and even causes a traffic jam for the boats. So, we had to wait for the right moment and dock to get back to the mainland.

It was already lunchtime and we decided to have a burger in a small cafe nearby. The prices are OK and the food is not bad! 😉

With high spirits taking with us is a new “friend”, we went along a narrow path along the coast.

The road was very picturesque and accompanied by beautiful waves and the sea breeze. There were skillfully stacked stones in the form of figures and columns along the way.

After a few hundred meters, we met by the ticket office. It turns out that you can go further for ₱100 per person because it is private property! I love the Philippines! 😀

Following the path with another 200 – 300 meters, another amazing beauty of nature was revealed to us – this is the Pyamaluguan Sabang Waterfalls which flows directly into the sea! Just breathe taking, extremely unusual, and beautiful! I have never seen anything like that!!! A wonderful and beautiful place to be!

Everything around was for relaxation. There’s a pool, tables, benches and a dressing room for the use which you will need to pay extra 🙂

In this beautiful place, we spent about an hour before hurrying back, because we had to go home to Puerto Princesa. We were looking forward to more adventures which I will describe in the future articles and this day will forever remain in my memory with vivid emotions and unforgettable impressions! Nature is so amazing! 🙂

El Nido: “Tour B” – the most unusual and uninhabited island hopping tour | Palawan