After spending two wonderful days in Prague, I decided to go explore its surroundings! When I was talking about Prague with my best friend, she mentioned one place that you should definitely visit if you are traveling in Czech Republic, this is Sedlec Ossuary, which is 70 km from Prague in Kutna Hora. I didn’t understand what kind of place it was! Since I was recommended to visit it, so I decided that this place is definitely worth a look.

How to get to Kutna Hora from Prague

The night before, I started looking for the best option on how to get to Kutna Hora from Prague. The Internet was full of tips that you can go by car or train, and there was some kind of bus… Everything was not very clear how to do it on a budget. In the course of my research, I found out the following:

These options would seem to be enough! But I decided to go further and find how to get to Kutna Hora even cheaper! 🙂

If you take a look closely at the regional railway network around Prague, you can find out that there are 13 tariff zones – 9 zones around Prague and 4 zones in the capital! You can buy a ticket for certain zones or only inside Prague, or combine them, depending on how far you need to go from Prague.

The detailed prices travelling around the certain traffic zones can be found in the Czech Railway’s website. However, I will mention the most interesting ones.

There are tickets for a month, a quarter, and even for a whole year! Since, I traveled for a short time, so the most interesting for me were offers valid for one day:

Since, Kutna Hora is located in zone 7, so those tickets which cover 7 or more zones will be the most suitable. In my case, you can take 13 zones for a day (to travel to any part of the region within 24 hours), or 7 zones for 3 hours to get to Kutna Hora, and then take the same ticket on the way back. So, the total price back and force will be 108 CZK. However, I decided to take a ticket for 13 zones, valid for 6 hours. Thus, the whole trip to Kutna Hora and back cost me only 100 CZK! As a result, this is the most profitable option to visit the main attractions of the city! 🙂

IMPORTANT! You have to validate your ticket at the railway station, before the train leaves!

A few words about trains in Czech Republic

I would like to tell you a few words about trains in Czech Republic. After my adventures in Asian countries, I was really surprised by the service and atmosphere on European trains.

Everything has sensors, there is an air conditioner in every sitting compartment, which is also regulated! There are places for people with disabilities and for pensioners with a more comfortable seat! Most of all I was surprised by the seats for cyclists and their “iron horses”! This is amazing! 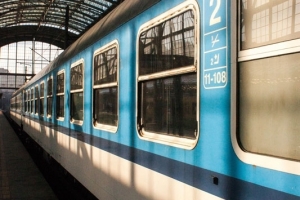 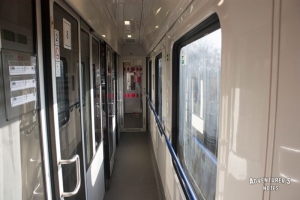 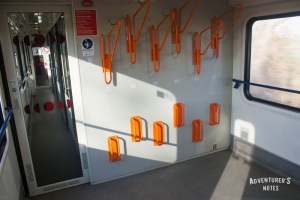 What to see in Kutna Hora

After only 50 minutes of a comfortable trip, I was at the Kutna Hora railway station! The weather was sunny, so this day should be very interesting.

There is a Tourist Information Center right at the railway station, where you can get the most detailed information on the sights around the city. My main goal was to visit the most interesting attraction in Kutna Hora – “Sedlec Ossuary”. After reading the brochure, I marked a few interesting places and went walking to explore the city.

After only a few hundred meters, I unexpectedly saw the first attraction! 😀

It is unbelievable, but the fact that the Philip Morris factory which produces cigarettes and other tobacco products is located on the territory of a former monastery.

Entry is free, strictly from 18 years and older.

Unfortunately, I couldn’t get into the museum, but the employees told me that there you can see the whole history and cycles of tobacco production, from the moment the company was founded in 1847 until today! It is definitely worth to spend half an hour at this attraction and find out some new information! 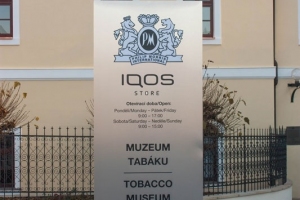 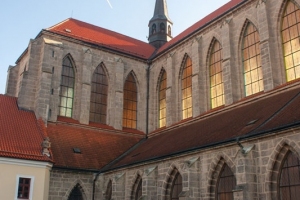 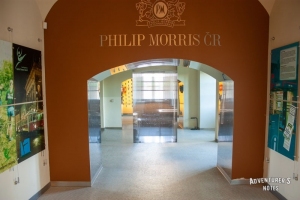 After the tobacco museum, I headed on to the main attraction in Kutna Hora.

Siedlec Ossuary – A Temple of Bones

So, what is the “Ossuary” – it can be a box, an urn, a place or a building for storing the skeletonized remains of the dead.

Kutna Hora is one of the largest burials of human bones! The most incredible thing is not only the scale, but also the method of storing the remains is a feature.

In the 13th century, the abbot of the Cistercian monastery in the suburbs of Kutna Hora was sent to the Holy Land, to Israel. When he was going back, he brought some land from Calvary and scattered it around the abbey cemetery. Since then, this cemetery has become very popular, and many people wanted to be buried on this territory.

During the plague epidemic in the 14th century, a lot of people died from diseases, wars and starvation. Their remains were ordered to be put in a Gothic cathedral with a tomb, because there was a catastrophic lack of space in the cemetery. Later, when these lands were controlled by the Schwarzenberg Clan, the family decided to put in order a pile of stacked bones. They hired a woodcarver František Rint to do this hard work. He approached this task creatively and decided to decorate the interior of the temple with human bones.

The scale is incredible! Absolutely everything is impressive, from the first minute you go inside. Here are huge columns, candle holders, various decorations on the walls. The most distinguished of all is a huge chandelier! I suppose, it was made from absolutely all human bones, and decorated with garlands of skulls. According to rough estimates, there are more than 60 thousand people remains in the temple.

I can describe a lot, but it is better to see firsthand. 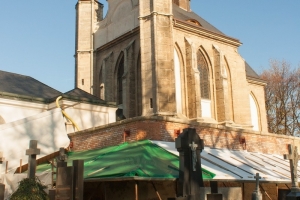 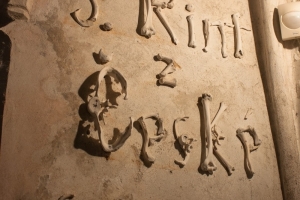 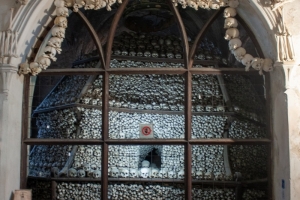 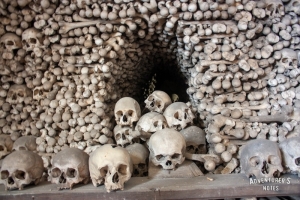 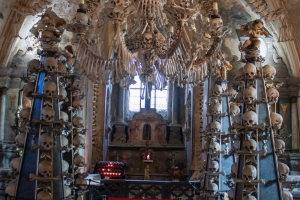 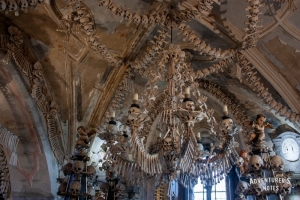 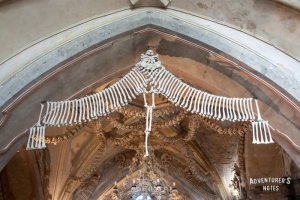 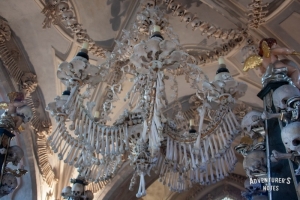 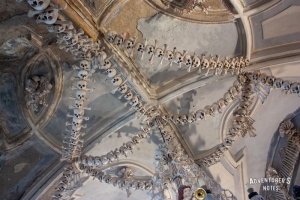 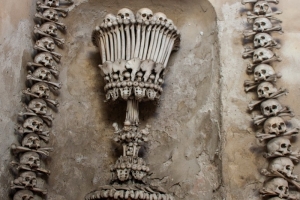 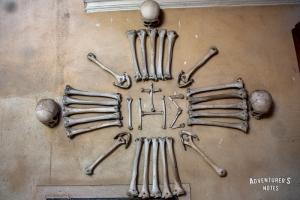 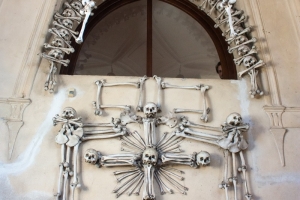 Opening hours and ticket prices to the Siedlec Ossuary

There are several options for visiting the complex:

You can find more information on the official website.

When I was at the railway station and investigating the advertising booklet about the most interesting places in Kutna Hora, I noticed one interesting place in my opinion. It was a chocolate museum! “I definitely should take a look!”, especially after one fact in this booklet, that you can, not only see exhibits, but also try chocolate. The expositions of this private museum are dedicated to the “Koukol & Michera” chocolate factory, which was one of the best in the world until World War II.

So, after Sedlec Ossuary, I decided to go there! Moreover, the time was already approaching to 14:00, which is the best time to have lunch.

There are cathedrals and other monuments along the way. 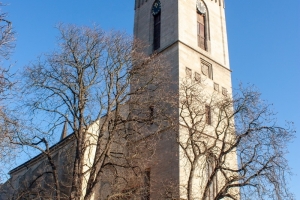 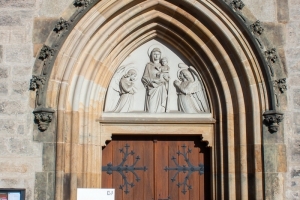 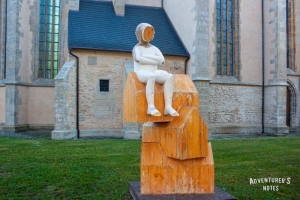 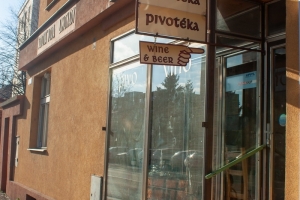 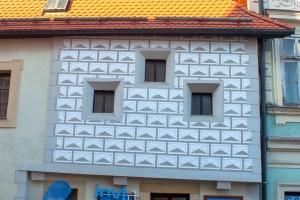 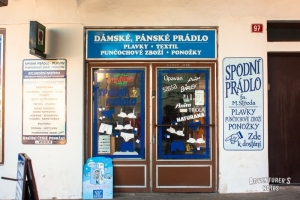 After a while I came to this place. The owner of this museum was already waiting for me! He told a little about the types of chocolate that he has in the factory.

I asked if it is possible to see the museum and how much it costs. It turned out that you can visit the museum for free, but a symbolic donation is welcome! 🙂 Since, I was very hungry and couldn’t wait to see everything and try chocolate, I donated as much as 20 CZK to the museum fund! 😀

What surprise awaited me after I walked up the stairs?!

The entire chocolate museum is located on an area of no more than 3 square meters!!! This is the smallest museum I have ever seen! 🙂

There are molds and chocolate bars of the pre-WWII era on the shelves and inside glass cabinets, as well as examples of packaging and accessories for the chocolate production. 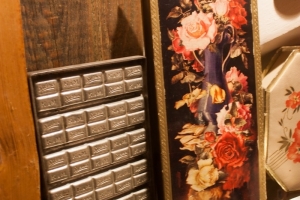 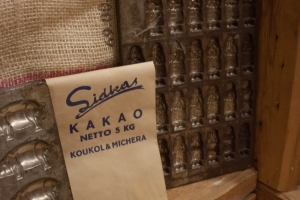 My disappointment knew no bounds! It turned out that you can try chocolate, but for a fee, because it is a museum-factory-shop! 🙁

After such fiasco, only a miracle could save me! And it happened! 🙂

On the way to St. Barbara’s Cathedral, I saw a girl filigree baking pancakes! She was so skillfully managing all her kitchen tools, like a magician, so, I bought the most delicious chocolate pancake, for only 18 CZK!

This is another huge temple, which is worthy of attention!

Unfortunately, I already haven’t had enough time to explore everything in details. Therefore, after I finished eating the pancake, I immediately went towards the railway station to return to Prague.

The day spent in Kutna Hora turned out to be very saturated with impressions and emotions. In addition, the city itself is very compact and comfortable. I recommend coming here to take a break from the city noise, beer bars and plunge into the atmosphere of ancient culture and history.

The first day in Prague I spent to see all the sights around the city, the second day I was in Prague Zoo. One more day was waiting for me to continue my first solo-trip.

I decided that it was worth following the advice of my friend and going to a neighboring country, to Germany, to explore the incredibly beautiful European city, the capital of Saxony – Dresden.

Prague Zoo: how to get, what to see, entrance fee | Attractions

One Day in Dresden: What to See, How to Get to Dresden From Prague | Attractions

Prague Zoo: how to get, what to see, entrance fee | Attractions

Prague for only $25 – my first solo adventure | Travel Tips

How to spend 4 days in Prague: the most interesting places | Attractions